FOXBORO, MA — Keion Crossen found himself aligned across from one of New England’s most reliable receivers, in the red zone, on his first day of training camp as an NFL player.

Crossen was a long way from last year around this time, when he was preparing for his senior season at Western Carolina. But he held his own, batting away a Brian Hoyer pass intended for Chris Hogan in the front corner of the end zone.

“You take pride in everything you do,” Crossen said Thursday when asked about the play. “Just being out there, I take pride in. The guys all work hard. To be able to earn the trust of the vets and show that I’m progressing, that’s what I take pride in.”

It was yet another moment when Crossen’s quickness and ball skills have caught the attention of onlookers ever since he was drafted by the Patriots in the seventh round this spring.

After running a 4.32-second 40-yard dash and posting a 6.67-second three-cone time at the Wake Forest pro day, the Patriots took a flier on the 5-foot-10, 185-pounder and he impressed with multiple deflections during OTAs.

“Lower level of competition, obviously, at Western Carolina, [but] he showed up on a big stage just from a workout perspective,” director of player personnel Nick Caserio said after the draft. “He really blew it out of the water. He’s undersized, just from a size standpoint, but he’s athletic. He runs well, he’s explosive, he’s real competitive. 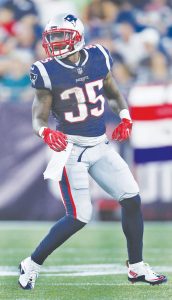 “(He’s) probably more of a perimeter corner. He played more on the perimeter at Western Carolina. We saw him work out there at Wake Forest, did a little more follow up work with him, and had him in here to Foxboro to visit with him. He’s a player. He’s young, he’s athletic, he runs well, great attitude. When you guys talk to him, this guy’s got a lot of energy. He’s real positive, really upbeat, so hopefully he brings that mentality and that mindset here,” Caserio said.

After a strong first impression, Crossen suffered an injury that limited him through the remainder of the spring. Some of the reps he saw with top-tier defenders then went to undrafted rookie corner JC Jackson.

Now that Crossen is healthy, he’s hoping he can pick up where he left off and build positive momentum with each opportunity he gets.

“It’s part of football,” Crossen said of his time missed. “Whatever happens, happens. You only control what you can control, and I’m just controlling today. Get better. Be positive, and do what I can do to help the team.”

Athletically, Crossen is NFL-caliber. But to make the Patriots roster, he’ll have to show that he can hold up when the pads come on. Will his size be a detriment against bigger, stronger receivers? Running with them won’t be a problem. Will tackling them? Jamming them? Can he contribute on special teams?

If he proves he can handle all of those things, then he’ll have to prove he can do them better than his new teammates at the same spot. Stephon Gilmore is an obvious lock for the roster. Eric Rowe and second-rounder Duke Dawson will be around by the end of camp, one would assume. Jonathan Jones and his special teams ability should earn him a spot, and Jason McCourty seems to have the inside track on another.

That’s a lot of jobs already spoken for or close to spoken for. Then there are others like Jackson, Cyrus Jones, Jomal Wiltz and AJ Moore who will be gunning for gigs themselves.

Injuries will factor into Crossen’s odds. So too will his ability to continue to get his hands on footballs. We all know that the Patriots made room for an unheralded but athletic rookie with a knack for making plays, knowing full well he may not contribute at all in 2014. Then he did — in Super Bowl XLIX.

It’s too early for Malcolm Butler comparisons, but the way in which Butler’s story began is encouraging for a Day 3 pick like Crossen looking to make an impact.

“It’s just confidence,” Crossen said. “Have confidence in yourself. Whether you’re a late-rounder, undrafted free agent. You still gotta come out here and do your job and show that you can play at this level.”