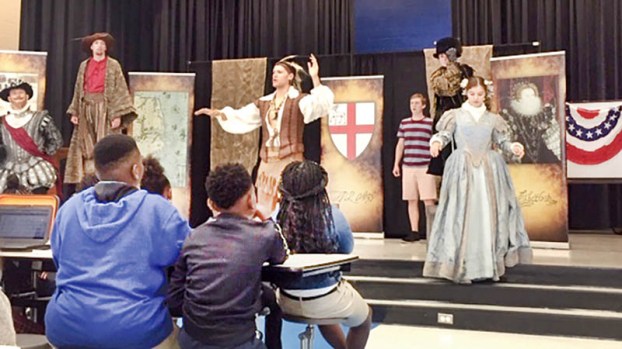 Mystery of the Lost Colony performed at Riverview Elementary School

MURFREESBORO – On Tuesday, Oct. 9, The Lost Colony performed for 4th and 5th graders at Riverview Elementary School in Murfreesboro.

The play was written by Matt Gabbard and directed by Lance Culpepper. The performance will be touring for three weeks to various elementary schools in Eastern North Carolina. The group has received grant funding from Dominion Energy as well as Wells Fargo to support the educational production.

The play is an exciting look at the mystery of The Lost Colony of Roanoke. The story centers on various aspects of the Lost Colony from early discovery, interaction with Native Americans and the eventual disappearance of the colonists. The performers were engaging and provided the students with great information related to colonial history. During the play, student volunteers were included.

After the performance was complete the actors and actresses held a question and answer session to further promote student knowledge related to the events surrounding the mystery of the Lost Colony of Roanoke.

“This show give kids an opportunity to experience the performing arts while exploring the oldest mystery in our nation’s history,” stated actor Joey Cassella who played the role of Chief Manteo in the production.

“We at Riverview would like to thank The Lost Colony for the performance offered to our students,” said Riverview Principal Lee Ford. “It was entertaining as well as educational. Our students enjoyed the experience. We are very grateful to all parties involved with bringing this event to our school.”

Riverview students were also appreciative of the opportunity to learn more about the mystery surrounding this important piece of North Carolina and American history.

“I loved the play because we got to sing and do the waves in the air,” said Deajah Gay, a 5th grader.

“It was really cool and fun. I would love to learn even more,” noted Anahi Rizo, a 5th grader.

“The play taught me a lot about our NC history,” said Hiliani Smith, a 4th grader.

“I liked how the costumes looked and the performance,” stated 4th grader Izayah Harrell.