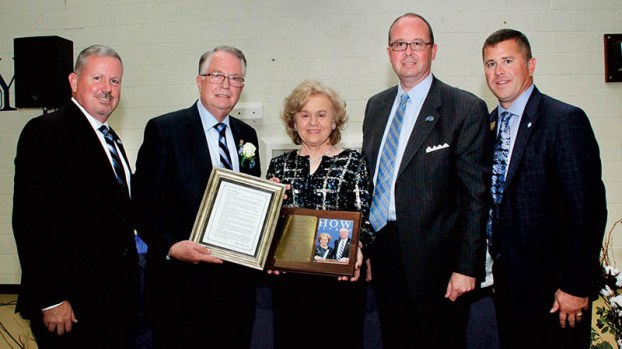 Chowan University Chancellor Dr. Chris White and his wife, Linda (second and third from left), were two of eight individuals inducted Nov. 3 into the Jim Garrison Sports Hall of Fame at Chowan. Making the presentations to the Whites are, from left, Patrick Mashuda (Director of Athletics), John M. Tayloe (Vice President for Development), and Chowan President Dr. Kirk E. Peterson.

MURFREESBORO – While his wife, Linda, was once a basketball player in middle school, Dr. Chris White said his athleticism as a young man was questionable at best.

Additionally, neither Chris nor Linda White ever competed athletically for Chowan College/University.

So, he asked, why was the couple selected for induction into the Jim Garrison Sports Hall of Fame?

The answer is obvious.

The 33rd annual induction ceremony for the Hall of Fame Class of 2018 was held recently at the J.M. Jenkins Center on the Chowan campus. There, Dr. and Mrs. White were among the eight new inductees. They were recognized as “Patrons” of the university for their unwavering support and love for Chowan.

The Whites came to Chowan in summer 2003. At that time the school was nearing closure. In the 15 following years the school experienced the most significant growth in its 170-year history. The enrollment more than doubled, as did the endowment and campus acreage. He also led the effort to take Chowan athletics to the NCAA Division II level. All buildings on campus were renovated, and many new buildings constructed, to include the aptly named Whites Crossing (student housing). Importantly, Chowan’s finances have never been stronger.

“To do what we’ve done here is simply amazing,” said Dr. White, Chowan’s former President who has now transitioned over to the role of Chancellor. “Sure, you expect to receive some accolades along the way, but not this….the Hall of Fame.

“We had the audacity to think we could come here during a time when this school was on the brink of closing and change things,” he continued. “Well, with God’s help and with the help of so many others that truly love this university, we changed it and it’s now thriving.”

While Dr. White characterized himself as a non-athlete, the same could not be said in regards to the six other former Chowan standouts who were part of the Sports Hall of Fame Class of 2018.

Bellamy, who later played pro basketball in three foreign countries as well as becoming a professional boxer, was quick to give thanks to the person he holds in high regards for his successful life.

“Almighty God gave me the strength and the courage to make it to this point in life,” said Bellamy, a native of Vanceboro. “You are not honoring me tonight, you are honoring what Almighty God allowed me to do in my life.”

While praising the members of his immediate family for their valuable input into his life, Bellamy shared special remarks about his now late brother, Walter Bellamy, who broke down racial barriers in the NCAA and in the NBA and was inducted into the NBA Hall of Fame in 1995.

“He gave me the inspiration to play basketball and to get into boxing,” Bellamy remarked. “I also need to praise my mother, she gave me the internal strength, the motivation to succeed in life. She pushed me to improve my grades in school.”

After his athletic career ended, Bellamy became a law enforcement officer. He is now employed as a security officer at Wake Forest Baptist Hospital in Winston-Salem.

Breeden was a four-year starter for Chowan as a first baseman where she posted many impressive numbers for the team. She played in 151 games where she tallied 154 career hits, 111 career RBI, 41 career doubles, and 16 career homeruns. She batted over .300 every season for the team and ended her career with a .343 career batting average. She was named to the USA All Conference Team two times and was an integral part of the team’s 2003 USA South Conference Championship.

“I am humbled and honored to join the ranks of so many other outstanding student-athletes who attended Chowan University,” Breeden stressed.

“I made lots of friends and I learned lots of lessons while playing,” she continued. “I played because I loved being part of a team, and how people unite for a common purpose can become greater than just one. Softball gave me far more than I can contribute back to the game.”

She said enrolling in college and playing softball gave her a sense of purpose.

“The things I cherish the most while at Chowan were not the victories we had, but the victories I gained personally in my life….respect, trust, friendship, commitment, love, turning failures into success, and putting team before self,” she shared. “All these things I have taken forward into my career. I now consider myself not only successful in my career, but a happy and successful wife and mother.”

Breeden is currently a Lieutenant in the Norfolk (Va.) Sherriff’s Department. She is an active member of the Hostage Negotiation Team, certified through the FBI.

A native of Newport News, Hazel is Chowan’s all-time leading scorer in women’s basketball with 1,445 points. The former All-American standout played in 108 career games, grabbing 390 career rebounds, dishing out 145 assists, and nabbing 145 career steals to go along with her all-time career record for points scored.

“I thank God; without him I wouldn’t be here today,” Hazel said. “I thank my parents for instilling in me hard work and dedication.

“If it wasn’t for my experience here at Chowan, I feel that I wouldn’t be the woman I am today,” Hazel added. “Thanks to all who have supported me over the years. Thanks for this prestigious award.”

Hazel is now an avid fitness enthusiast and spends time helping at-risk youth girls in the Alexandria, Virginia Public School System through a program titled, “Space of Her Own”. She also volunteers at Bread for Life in Washington, D.C.

Hill, another Hall of Fame inductee with Alexandria, VA ties, helped the 1989-90 Chowan squad to a NJCAA Region X Championship appearance. The then-Braves finished up the 1989-90 season with a 25-7 overall record, an Eastern Region Championship, and runner up finish in the Region X title game. They climbed as high as 13th in the NJCAA National Rankings that season. He went on to play at Georgia Tech, helping the Yellow Jackets to win the 1993 ACC title.

He praised the Christian foundation at Chowan that allowed him to grow and spread his wings.

“When I was here I learned that I could have a direct access to talking with God,” Hill recalled. “I learned how to pray to him; I learned that here. This school has had such a big impact on my life. My experience here shaped my future as a husband, as a father, and as a schoolteacher. This is a place that changed my life and I’m humbled and honored to be a part of this Hall of Fame.”

Married with three children, Hill is employed at Bryant Alternative School with Fairfax County Schools as a Special Education Teacher.

An NJCAA All-American defensive end at Chowan, Kenan enjoyed an outstanding career in Murfreesboro. In his sophomore season he finished with 117 total tackles (75 solo stops).

“I thank the Hall of Fame committee for bestowing this honor upon me,” Kenan said, who also thanked his parents, his high school coach, legendary Chowan coach Jim Garrison, and his cousin, Reggie, who introduced him to the sport of football.

“They taught me to never give up; they gave me their unwavering support,” he noted.

Melton is currently employed with Cort Trade Show and Event Planning in Bowie, Maryland where he resides with his wife and two sons.

A native of Norfolk, VA, Melton was also an NJCAA All-American defensive player at Chowan.

“Thanks to the (Hall of Fame) committee for giving me the opportunity to come back to this school that I so dearly love and respect,” Melton remarked.

He had praise for the legendary Coach Garrison and other coaches for, “making us all into men.”

Melton joked that because he never finished out his career at NC State due to an injury, “I still have two years of eligibility left and I work out every day at the YMCA; I think I can still play. I will be the oldest college player in the country, but that spirit still burns within me.”

Melton now spends his days on the famed Outer Banks where he is an avid surfer.

“We have an impressive class of Hall of Fame inductees tonight and each inductee has proven to be deserving of this honor,” stated Chowan University President Dr. Kirk E. Peterson during his remarks made at the annual banquet.

As a former student-athlete and All-American collegiate swimmer, Peterson said he has first-hand knowledge of the sacrifices an athlete makes to balance their involvement in sports around a busy academic schedule.

“I understand the significant time and sometimes the excruciating pain effort it takes to perform at a high level. I commend each of you for your grit and determination that has led you to this Hall of Fame induction.”

The Sports Hall of Fame at Chowan is named in honor and memory of the late James G. “Jim” Garrison who dedicated over 50 years of his life as a coach and athletic director at the college. Coach Garrison passed away on April 3, 2015 at the age of 82.

AHOSKIE – Travonte’ J. Warren has always dreamed of being an attorney. He is the son of Adell Overton Warren,... read more