Run for the record

MURFREESBORO – If he hadn’t missed two games, no telling where he might be.

Deshaun Wethington burst for 297 yards Saturday in just his third game since returning to the lineup following an early-season injury, and he put on quite the show here for a large Homecoming crowd at Garrison Stadium.

Wethington torched the Elizabeth City State University defense for three touchdowns on 28 carries en route to a 49-41 Chowan win that broke a five-game losing slide. The victory also gave the Blue-and-White its first conference win of the season in the CIAA.

Wethington produced the most yards in a single-game at home nearly missing the all-time single-game mark of 308. 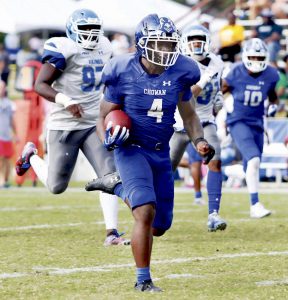 Chowan University’s Deshaun Wethington (#4) breaks for a long gain Saturday against Elizabeth City State. Wethington and the Hawks made it a successful Homecoming as he set a home-field rushing record of 297 yards and the Hawks downed the Vikings 49-41. Next Level Photos / Charles Revelle

“It feels good,” the Suffolk (VA) native said after the contest. “While this is exciting, I still want to get better; but I’m glad to do it in a big-time game.”

There were other superlatives for the Hawks to hang their helmets on: Bryce Witt produced 221 yards through the air with four touchdowns while adding 60 more yards on the ground.

Adrian McNeil hauled in four receptions for 79 yards and a touchdown.  Imeek Watkins caught two touchdowns, while Brian Hopper Jr. picked up one.

“We’ve been through a lot of adversity,” said Witt, postgame. “Homecoming is always a great time here, and it has been a while since we got a win.”

After a three-and-out by the Vikings to open the game, ECSU punted and the Hawks would find the end zone two plays later.  Witt connecting with McNeil for 23 yards before Wethington bulled his way untouched for a 46 yard touchdown run. Jackson Brooks’ kick made it 7-0, Chowan.

The Vikings drove 69 yards and tied it at 7-7 before Chowan used the ground attack and short completions to move the ball down the field. Witt found Watkins on a 13-yard slant for a 14-7 score.

The Vikings tied it to finish the first quarter at 14-all. Then after a Chowan turnover in the red zone, ECSU marched 85 yards in the second stanza to take their first lead, 21-14.

Chowan next looked to have another scoring drive in the works, but were stopped on the Elizabeth City 10-yard line and when they went for a 27-yard field goal, Brooks’ attempt was blocked. The Vikes then moved the 90 yards to the end zone and a two-touchdown lead at 28-14, which held through halftime.

The Hawks opened the second half turning the ball over, but what followed would turn the game around. Rafiq Abdul-Wahid would sack ECSU quarterback Kedrick Patterson, and then Josh Berry picked off Patterson, setting the Hawks up at the 10-yard line of ECSU. After going nine yards, Wethington punched it in from one yard out to get Chowan within seven at 28-21.

“This is a confidence-booster,” said Abdul-Wahid in post-game. “We know what the formula is for winning, and it starts right now.”

ECSU drove to attempt a field goal, but it was shanked off to the right. The Hawks then drove to get the equalizer: a nine-yard pass from Witt to Brian Hooper, and the game was all-square once again, 28-all.

Starting at midfield on their next drive, Wethington would rack up 22 yards down to the 38 before Chowan used a flea flicker for the touchdown to regain the lead at the end of the third quarter, 35-28.

Watkins would score on a Witt pass to give Chowan a 14-point lead, 42-28, before the Viking offense woke up and Patterson struck for a 39-yard scoring toss that cut it to 42-35.

With over four minutes remaining, Wethington capped a nine-play 55-yard drive by punching it in from a yard out to push the lead back to 14, 49-35. ECSU would score one more time, with about a minute-and-a-half remaining, but Chowan recovered the onside kick.

The last Hawks drive just got more record-book yardage for Wethington, who took the home rushing record on a 32-yard scamper. He got two more touches before the clock struck all zeroes.

“We didn’t start like we wanted, but a lot of things helped turn the game,” said interim head coach Mark Hall. “The last five weeks have been challenging, but I’m proud of this team’s effort. Good things happen when we all work together.”

Chowan will host Virginia State on Hall-of-Fame and Senior Day in the final home game of the season next Saturday, Nov. 2.   Kick-off is slated for 1 p.m.

WINDSOR – Denied a trip to the finals a year ago in an upset, the Lawrence Academy tennis team left... read more