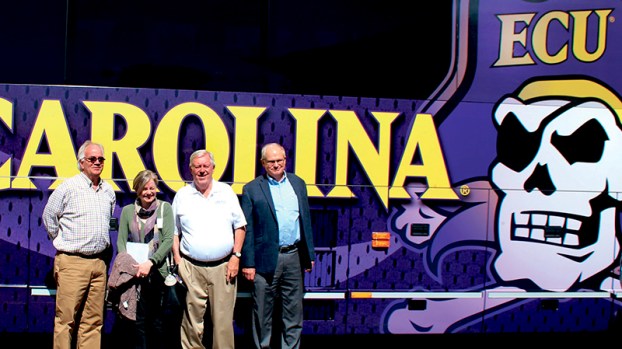 Best of the East

WINDSOR – With its natural resources, food, energy, and recreation, rural America is sustaining the country; and to better understand the rural landscape, programs like the Rural Prosperity Initiative are shining a spotlight on how that sustainability will benefit everyone.

The tour, aboard a huge and colorful transport bus, and now in its third year, is a two-day bus ride from its home in Greenville with stops around eastern North Carolina. It’s designed to introduce ECU faculty members to the ‘Down East’ area, thus giving them an opportunity to meet the land and the people the University serves. It also gives researchers a chance to meet their peers from other academic backgrounds and disciplines that hopefully lead to new research projects that benefit the region.

“We know the eastern region has some challenges, but we also know the area has produced some amazing solutions,” said Dr. Mary Farwell, ECU Assistant Vice Chancellor for Research, Economic Development, and Engagement, and the tour director. 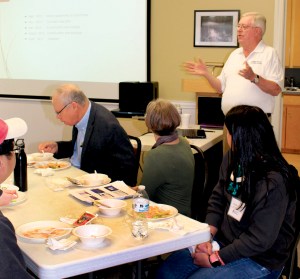 Windsor Tourism and Marketing Director Billy Smithwick (standing at right) gives the group an update on the town’s popular Treehouse Village, located along the Cashie River. Photo by Gene Motley

Among its recent stops in the Roanoke-Chowan region were in Bertie County at Windsor’s Roanoke Cashie River Center where they heard from Town Mayor Jim Hoggard, Windsor Tourism and Marketing Director Billy Smithwick, and Bertie County Executive Director for Economic Development Steve Biggs.

“For us, we want them to look at the effects of natural disasters and the economic impact associated with that,” said Hoggard. “We’ve been flooded four times, including twice in 13 days of each other with Matthew and Julia. We’ve lost some businesses, about 100 homes – most of which have been bought out by FEMA (Federal Emergency Management Agency).”

While there has been rebuilding and relocation for some homeowners, Hoggard wanted the group to realize some of the county’s small businesses had no aid.

“We certainly don’t want to lose them,” he emphasized. “But on the positive side, we do have 80 percent of the town not affected by flooding. What we want them to see is our ongoing plan to try and minimize the flooding.”

It was a similar busload of ECU staffers who came to Windsor in the aftermath of Matthew and Julia and offered their assistance to the region. Specifically there was retired professor Dr. Stan Riggs who helped formulate NC-LOW (Land-of-Water), and completed a study on why the region floods and what can be expected in the future.

“Overall, we have many positive developments we want to show them such as our Treehouse Village (on the Cashie River) which is thriving now with visitors every weekend,” Hoggard noted. “And the idea for the treehouses was actually hatched at ECU.”

Smithwick, a big part of the Treehouse Village as well as the River Campground, says the average visitor spends roughly $500 per weekend in town.

“We know it’s had a good economic impact just from there,” Smithwick said. “Windsor’s not just a great example of history, but also of how they’ve met their challenges with flooding and we’re interested in economic development as part of this tour as well as education and health care. This town is also a great example of the resiliency that our communities have.”

The tour theme also touched on how Rural America’s population is aging as younger generations leave for better economic opportunities in cities. At the same time, rural health and education lags behind urban centers. This unprecedented stress and decline puts the security and prosperity of the whole region at risk. But there are ways to bridge the divide.

“The town of Windsor worked together with the county on our Tall Glass of Water project,” said Biggs. “This is a project that’s just getting started and will generate over one million dollars with just its first phase. And a million dollars for a county like this is a lot of money.”

Biggs underscored to his listeners how the project located and the confluence of the Chowan River and the Albemarle Sound is a solid work in progress after first opening to the public in June of 2019. But reminded the group that as educators, they can assist in the mission.

“The biggest thing we look for here in Bertie County is an educated work force, and that’s tough for any rural community,” Biggs said. “That’s why we’re so proud of our young people who have returned to Bertie County to live, work, and make a better quality of life for us all.”

Biggs thanked those within the University medical community for how they have upgraded the region.

“Anytime I had a company that was considering our county, their number-one concern used to be health care. Now, they know they can get help because if it’s something special, Greenville is not that far away,” he acknowledged.

Biggs also used the opportunity to pitch real estate investment in the region.

“Let anyone you know who wants to settle in among good folks that we have homes available,” Biggs insisted. “We’d love to have you, or anyone you know of who’d like to locate here.”

The director stressed the county’s cooperation with the ECU project of ‘Grow Your Own Workforce’, a place-based workforce model that focuses on attracting, developing, supporting and retaining local residents to create a sustainable pipeline of workers.

“When we opened the offender facility (Bertie Prison) a few years ago, it was tough to find people to work there, so we decided it would be best to work through our school system,” he noted. “Now we have a Public Safety cadet program in our local high school, and we were one of the first ones to get this. The former governor got behind it, and now we have a lot of these graduates who’ve gone on to community college, received their Associates degree, and returned back home to work here.”

Biggs boasted the cadet program has now expanded to include EMS and welding, which has benefited county Emergency Management as well as Nucor Steel locally.

“Our biggest business is now, has been, and always will be agriculture,” he said. “If you ever see another peanut in your life, think of Bertie County’s peanuts. We hope you’ve picked up on how great an area this really is and you’re seeing how well we’re getting things done.”

What would happen if you placed 10 stick matches in a straight line, each one-quarter of an inch apart, and... read more