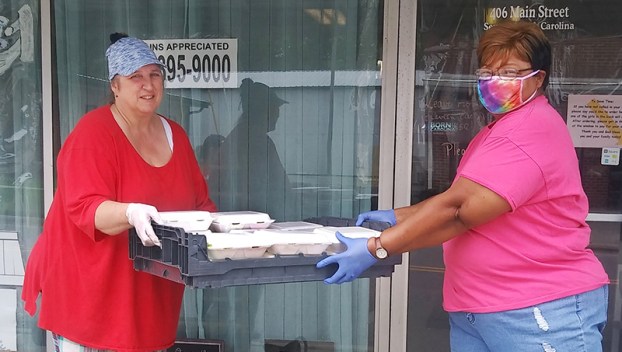 Sheryl Moore (left), owner of The Well of Severn, hands off hot meals to CSEP volunteer Ellen Bethea to deliver to local shut-ins and senior citizens in need. Contributed Photo

SEVERN – “We’ll keep doing what we can do,” said Phyllis Newsome, Director of the Community Senior Enhancement Program (CSEP).

Newsome was talking about the Severn-based senior citizen program which has learned to do things differently in the midst of the COVID-19 pandemic. The all-volunteer nonprofit group had been meeting regularly to provide meals and activities for area seniors, but the virus, which tends to hit older people harder, forced them to stop meeting in person back in March. 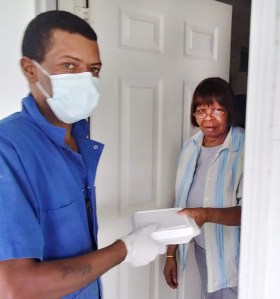 Volunteer Cory Powell (left) delivers a fresh cooked meal to Lillian Kindred. Meals often include the same kinds of items that are on the menu at The Well of Severn. Contributed Photo

“Everybody who comes to our program is a vulnerable person,” she explained, adding that social distancing was not possible in the facility where they usually meet.

Many of the CSEP attendees aren’t able to drive anymore and relied on others for transportation. But that’s when community members came together to help.

Sheryl Moore, owner of the Well of Severn restaurant, had already been looking for a way to help out the community after one of her former customers—a regular who had often dined there before moving into a rest home—had passed away from the virus. She thought about ways she could help out in the midst of the pandemic, and came up with meal delivery.

“I felt like the Lord kind of put it on my heart for the people who were shut-in around here. To carry them a meal because that was one meal a day they didn’t have to worry about,” Moore explained. “Sometimes when God shows you something, it’s not so that you can pray about it, but to do something to help.”

She reached out to people in the town to figure out who would need food deliveries, and connected with the CSEP group.

“I just love this group anyway. They’re all about reaching out to help people. They have been a group that’s made a difference,” Moore continued.

Since April, Moore and her staff have cooked and prepared the meals while the CSEP group and other town volunteers deliver them. It’s one meal delivered five days a week to a group of about 35 senior shut-ins.

The meals have consisted of many things The Well of Severn usually has on their menu, including barbecue, chicken salad, hamburger steak, mac & cheese, mashed potatoes, cabbage, desserts, and more.

Newsome added that the senior group has been able to receive different items from a food bank to distribute as well. The CSEP group is supported by First Baptist Church Severn and Rev. Elisha Barnes, and they often are able to use the church van for deliveries.

The regular deliveries, however, are more than just a meal. They’re a way to connect to the people who aren’t able to get out of the house right now.

CSEP volunteer Ellen Bethea said many of the seniors are happy to see them and like to chat a bit before the group heads to the next house. Some even like to wait on their front porch for them to arrive.

“I think it is something God used to help with the loneliness,” Moore mused, adding that she enjoys when she sometimes gets phone calls from people afterwards just to talk about what they ate that day.

When they first started the meal delivery, Moore said she thought it would only last a few weeks. But the pandemic has been more unpredictable than expected. She says, however, they intend on continuing as long as they’re able. 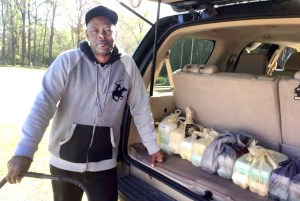 The same sentiment was echoed by Newsome. They both welcome any donations if people wish to contribute.

Moore also has gift cards available that can be designated for helping the senior shut-ins. They can be accessed at squareup.com/gift/02GZ8Z5QFYNCV/order

Newsome said the CSEP group isn’t even considering reopening for regular meetings until at least September, just so they can make sure it’ll be safe for everyone when they do come back together.

“When we had to close our program down temporarily, I felt like there should be something I can do. There’s got to be something else we can do,” Newsome said. “And when Sheryl made that suggestion, I said this is the perfect thing.”

“We’re just evolving,” she concluded. “We’re still doing the same thing with our seniors but just in a different way.”

WINTON – Effective July 1, David B. Cotton will no longer be the Interim Hertford County Manager. The interim title... read more