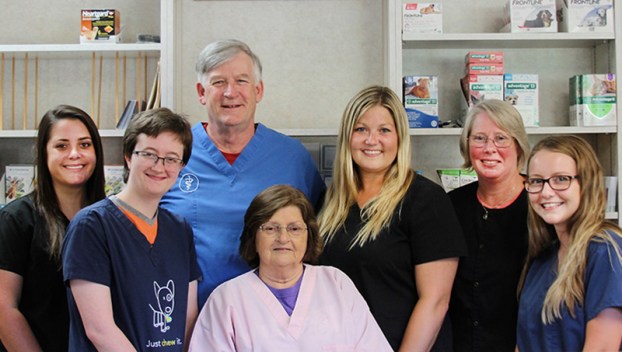 End of the line

AHOSKIE – As it is in any line of work, all good things must come to an end.

That fact unfolded here on Friday afternoon when Dr. Pat Proctor locked the door for the final time on Ahoskie Animal Hospital….his “home away from home” for the past 37 years.

“There are a multitude of things behind my decision to retire,” said Proctor, a Kentucky native. “There’s my age (64); the fact of losing family members which leads you to think about your own mortality; and then there’s family….I have two sons, one in Alabama and the other in Wilmington [NC] plus other family back in Kentucky, and my wife, Pamela, who has already retired. I would like to spend more quality time with family, but you can’t do that working a full-time job.

“I was hoping to turn this practice over to someone else, but couldn’t find anyone interested. So, the time has come to close it down,” he added.

Proctor came to Ahoskie in 1983, arriving at a time when another legendary veterinarian, Dr. Monk, was ending his career.

“Dr. Monk was closing down his business and retiring,” Proctor recalled. “There was another veterinarian here who had set this practice up, but hadn’t opened it, and was looking for a veterinarian to come in. My wife [Dr. Peggy Proctor, also a veterinarian] and I were in Little Washington then, working for someone else, and we wanted to have our own practice. This was exactly what we were looking for, so it was a great fit right from the start.”

The husband-and-wife worked together for approximately 12 years before ending the business relationship and marriage.

Over the years, Proctor has seen his practice grow, both in service to pet owners and in his staff.

“It’s been a very successful practice and a successful career for me personally,” he stressed. “The people of this area have treated me like I was born here, and I’ve been so lucky and blessed to have a wonderful staff. Some of them have been with me for over 25 years.”

“Our goal has been to grow this practice to the point where we are all one big, happy family, and we accomplished that,” Proctor said. “The best part has been seeing a client come in with a new, young pet and serving them all the way through the life of that animal. And when you’ve been here for 37 years, you get to see that take place more than once….plus you get to see second, even third generations of family members as your clients. That’s made it so much fun and I thank all my clients for the confidence that showed in me and my staff to care for their animals.”

Proctor is also well-known in the local area as a NCHSAA-certified high school football official. He spent 24 years in that role prior to hanging up his whistle several years ago.

He also co-founded the Ahoskie Youth Football League, an organization he still serves as its financial officer, and has performed as an actor on the Gallery Theatre stage.

Dr. Proctor isn’t the first in his family to practice veterinary medicine. His now late grandfather, father, and older brother (Delano Proctor Sr., Delano Jr., and Delano III) were all veterinarians back home in Kentucky.

“I started with some of the basics when I was eight-years-old,” said Proctor, who later earned his Doctor of Veterinary Medicine degree from Auburn University. “I was doing the anesthesia on horses for my dad to perform surgery. When I got in college [he started out and earned a BS degree at the University of Kentucky] I moved over to a small animal practice owned by my dad and his partner. I worked there all through college, which led me to decide on a career treating small animals.”

The changes he has witnessed over the years are through the advancement of veterinary medicine technology.

“The equipment we have today allows us to make fast, accurate diagnosis…we can do that in-house,” Proctor stressed. “Another big step forward is with the medicines we now use, especially with the prevention of heartworms. The average life of an animal when I first got here in the early 80’s was eight-to-nine years; now it’s 15-to-18 years. That’s double the lifespan.”

Another noticeable change during Proctor’s career is the type of dogs he has treated.

“Back then, I basically worked with what I call yard dogs…great big dogs that stayed outside year-round,” he said. “That’s not the norm nowadays. The great percentage of dogs I see today are house dogs between 20-to-40 pounds. They sleep in the same bed with their owner. They’re more like a family member than a pet.”

If there’s been one drawback as of late, it’s connected to the medical restrictions caused by the COVID-19 pandemic.

“I haven’t had the opportunity as of late to enjoy the one-on-one interaction with the pet owners; with the way things are today, all of that interaction is over the phone,” Proctor noted. “I really enjoy that face-to-face interaction part and have greatly missed it.

“It’s been a good ride; veterinary medicine has been good to me and my family. It’s bittersweet knowing that I’m the last of the line of veterinarians in my family, but I’m leaving on Friday with no regrets,” he concluded.

JACKSON – To keep everyone “on the same page” when it comes to education funding, the Northampton County Board of... read more