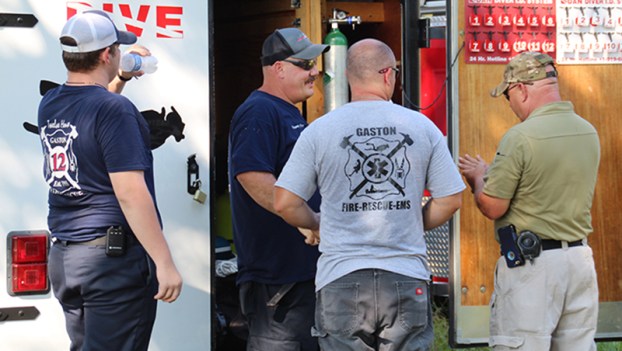 Volunteers from Gaston Fire & Rescue talk with Lt. Alan Roye (right) of the Northampton County Sheriff’s Office. They conducted a search on Tuesday as a part of the ongoing investigation in the disappearance of Daniel Moses. Staff Photo by Holly Taylor

RICH SQUARE – Nine years have passed, and there are still only unanswered questions in the disappearance of Daniel McCoy Moses. But the search continues thanks to efforts from his family.

Members of the State Bureau of Investigation (SBI), Northampton County Sheriff’s Office, and Gaston Fire & Rescue were out in the Rehoboth area of the county on Tuesday, July 21 to conduct a search operation. 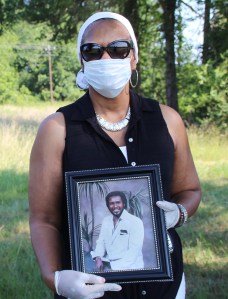 Shelia Moses holds a photo of her brother, Daniel, who has not been seen since June 2011. Staff Photo by Holly Taylor

Lt. Alan Roye of the Northampton County Sheriff’s Office, who is currently the investigator in charge of the case, explained they were using new equipment to search old wells located near where Daniel Moses’ house used to stand.

Even though there have been no new developments in the case, volunteers from the Gaston Fire & Rescue Department brought their underwater cameras to drop down into the wells to search for human remains that cadaver dogs may have potentially missed.

Temperatures climbed high on Tuesday as the search continued. Lt. Roye said the conditions were similar to June 16, 2011: the day Daniel’s house burned down and the family discovered he was gone without a trace. Roye, who was a member of the local fire department at the time, was one of the people who came to put out the flames which engulfed the home.

Daniel’s vehicles were still at the house, the doors had been locked, and the AC had been running. But no body or blood was found in the house after the fire.

In the nine years since that day, no answers about what happened to Daniel have been uncovered.

Shelia Moses, one of Daniel’s siblings, came to watch Tuesday’s search. Since Daniel went missing in 2011, Moses has fought tirelessly to ensure the case remains active and searches like the one on Tuesday have continued. She has also repeatedly called for the FBI to get involved in the investigation.

Moses said she believes there’s a possibility that Daniel was taken across the state line to Virginia, since his cell phone was last traced there a few days before the house burned.

“There is no proof that he ever came back,” Moses said, explaining that crossing state lines should have been enough to get federal investigators involved.

“My question remains the same: where’s Daniel and where’s the FBI? Not just for Daniel but for all the other missing people in Northampton,” she continued.

She pointed to the disappearance of Shawn Alston in Garysburg in October 2012 as an example of another unsolved case which has needed more scrutiny.

As the years have passed, Moses has tried to piece together all the information about what happened to her brother. She said she knows he didn’t just leave on a trip without telling anyone—not with his vehicles still in the yard, the AC still on, and his pet dog not secured as he usually did when he was planning to be gone for a while. She said Daniel had also suddenly changed his phone number not long before his disappearance.

Daniel was an accomplished martial artist, so she believes the crime was either a random act of violence or committed by someone who knew him well.

In 2014, the North Carolina Community Emergency Response Team (CERT) brought cadaver dogs out to search the wooded areas nearby the Moses home. But that search didn’t turn up any new leads or information.

“I’m just really glad they at least came out,” Moses told the News Herald on Wednesday.

Previously, she said she felt like the investigators had left plenty of stones unturned and hadn’t been held accountable enough, but now they can begin to go over the case again in detail, retracing Daniel’s steps and interviewing new people.

Moses also said she will start another petition to get the FBI involved to bring their resources to the table.

“We’re trying to raise awareness,” Moses said. “We just want to keep it in the public eye, so the people don’t forget that not only Daniel is missing, but there are other people in Northampton County that are missing.”

The Moses family and the SBI are jointly offering a $15,000 reward for information that will lead to Daniel’s whereabouts. Anyone with information can call the Northampton County Sheriff’s Office at 252-534-2611 or the NC State Bureau of Investigation at 800-334-3000.

Back to school plans announced

Local plans are being developed for the type of learning environment that Roanoke-Chowan area students will experience when public schools... read more