GATESVILLE – The motto of the Gates County Community Partnership (GCCP) is “to inspire and increase community engagement by the citizens of Gates County for the educational and social development of its youth.”

Those words were on full display here recently in the parking lot of Gates County High School. There, 15 rising eighth graders at Central Middle School were the surprised recipients of hi-tech gifts that will enrich their lives educationally. 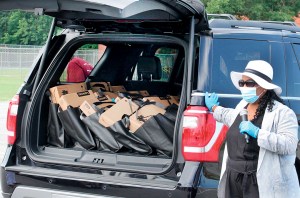 Crystal Harden opens the back of her vehicle to reveal the hi-tech gifts that were awarded to the core group of the Saunders Science Scholars. Staff Photo by Cal Bryant

Those students, representing the core group of the Saunders Science Scholars who are now rising eighth graders, each received Chrome Books (laptop computers), Jetpacks (that provide internet hotspots at their homes) and goody bags containing other items.

The Morehead Planetarium and Science Center at UNC-Chapel Hill introduced the Saunders Science Scholars program in Gates County Schools in the summer of 2018, thanks to funding by their advisory board member, Steve Butts of the Butts Charitable Trust, and through a collaborative effort of the GCCP.

A second grant through the Butts Charitable Trust will add 15 more students at the Middle School (rising 7th graders) to the program. They will receive their Chrome Books and Jetpacks at a later date.

“The Saunders Science Scholars program will mentor these two groups of students all the way through their senior year at the high school,” said GCCP President Benjamin C. Saunders, Jr. “The program also offers other educational outreach venues for these students and their parents. 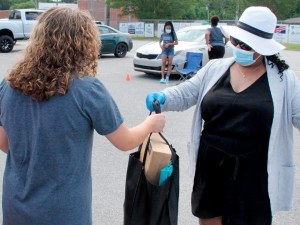 One of the Science Scholars at Central Middle School receives her laptop computer, home internet hotspot device and other items from Crystal Harden. Staff Photo by Cal Bryant

“This is all for the educational uplift of these students,” Saunders stressed. “This gives them the tools they need to be the best they can be, whether they choose to move forward with their education at a college, a trade school, or the military. It’s all about giving them an opportunity to broaden their horizons.”

GCCP was formed in October of 2018 by Saunders Jr., Brian Rountree, Sherley Jones Jr., and Michael Gatling – all Gates County natives and GCHS grads. They have hosted several events, to include youth basketball camps and alumni basketball games. They have donated supplies and equipment to the local school system as well as implemented an effort to begin a scholarship fund.

“Giving back allows the community to thrive economically, socially and in the realm of education,” said Jones. “Anytime we can make our community a better place, it’s a good day for each individual citizen. Yes, it’s great for the kids, but something like this is a blessing for everyone.”

“The Science Scholars here will be engaged throughout the year with science activities based on our curriculum and activities for the community here,” stated Crystal Harden, Director of Program and Inclusion Initiatives the UNC’s Morehead Planetarium and Science Center.

“They will also take tours of college campuses and engage with real scientists about their research projects, both in person and via Zoom (real-time meetings online),” she added. “And the parents are engaged as well.”

“The Gates County Community Partnership led by Mr. Benjamin Saunders, Jr., Mr. Brian Rountree, and Mr. Sherley Jones, and the Saunders Science Scholars program supported by Ms. Crystal Harden, Director of Program and Inclusion Initiatives at the Morehead Planetarium and Science Center at the University of North Carolina at Chapel Hill, are a godsend,” Dr. Williams said. Their generous spirit or giving back to the community by providing educational opportunities for the students and families in Gates County Schools is immeasurable.

“The investments they have made in our school community by donating educational resources, their time, talent and passion is extremely appreciative. Together, we have made tremendous progress for our children and families. Because of organizations, universities and Gates County alumni working together, we are leveraging opportunities and capitalizing on assets to increase student engagement and promote student success now and in their future,” he added.