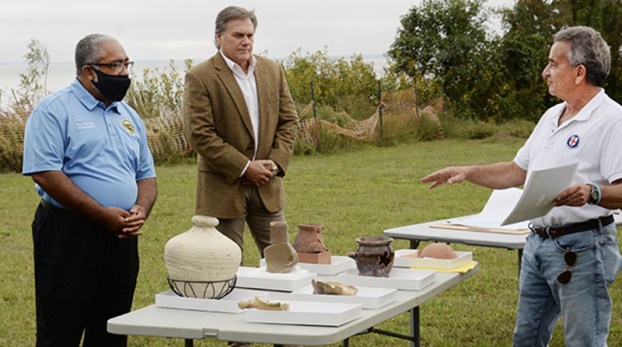 MERRY HILL – Survivors of Sir Walter Raleigh’s “Lost Colony” moved inland and lived for several years along the Chowan River in what is now Bertie County, according to new evidence excavated and identified by archaeologists from the First Colony Foundation.

Foundation President Phillip Evans made the announcement on Thursday of this week following years of research and archaeological excavations at a site located just south of the Eden House Bridge (US 17).

“We are confident of our findings,” Evans said.

On land now belonging to Bertie County (part of its “Tall Glass of Water” project), the site has been designated Site Y. A nearby site previously discovered by Foundation archaeologists was designated Site X in 2015.

“What has been found so far at Site Y in Bertie County appears to me to solve one of the greatest mysteries in early American history, the odyssey of the ‘Lost’ Colony,” said Dr. William M. Kelso, CBE, FSA, Emeritus Director of Archaeology and Research at Jamestown Rediscovery. “And now, like Jamestown, knowing more about where the history of the English-American nation began is a crucial step toward a full understanding what the American nation has become.” 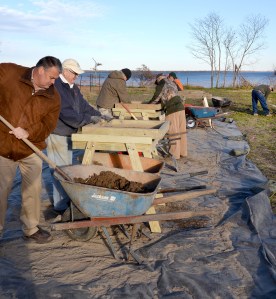 Beginning in December 2019, Foundation crews gathered data from ground-penetrating radar and screened soil excavated from 72, 5-by-5 test squares, unearthing ceramic sherds from the Roanoke Colony period. The sherds represent food and drink preparation, consumption, and storage, indicating that the Roanoke settlers were actually living at the site.

Interpretations of the evidence suggest occupation by a single extended family with unrelated servants or by several smaller family units.

First Colony Foundation researchers are confident that these ceramics cannot date to the time of initial permanent European settlement by Nathaniel Batts in 1655 some two miles from Site Y. The absence of colonial tobacco pipe stems with large bore holes presents clear evidence that there was no prior undocumented 17th-century English settlement at the site. First Colony Foundation research comparing key ceramics from Site Y to their occurrence on more than 20 pre-1650 sites in Virginia produced results indicating that the Site Y ceramics cannot date to the Batts period.

The archaeologists encountered no Late Woodland Native material at Site Y. This reinforces earlier conclusions that material excavated at Site X represents neither European goods in the trade network with the Native American population nor simultaneous habitation by both English and natives at the two sites.

Site Y further substantiates First Colony Foundation archaeologists’ conclusions that Site X was a short-lived habitation of another small group of the colonists who left Roanoke Island after the birth of Virginia Dare and the return to England of her grandfather, Governor John White, in late summer of 1587.

Both Elizabethan sites are near the location of the native Algonkian town known as Mettaquem, which First Colony Foundation researchers tested archaeologically in 2018.

Grants from Bertie County, the Town of Windsor, the Walter A. Bloedorn Foundation of Washington, D.C., combined with donations from First Colony Foundation’s loyal and generous supporters, made possible the field work and post-excavation analysis.

Both Site X and Mettaquem are now part of the Salmon Creek State Natural Recreation Area as the result of preservation efforts of the Coastal Land Trust.

The ultimate fates of the individual settlers remains unresolved, but these discoveries provide important insights into the actions the 1587 colonists took following their departure from Roanoke Island. Several prominent historians of the Roanoke ventures believe that there was not a likely single large relocation site, but that many of the Roanoke colonists dispersed into numerous small settlement groups, just as a food shortage in 1586 had forced Raleigh’s first Roanoke colony to disperse.

“Possibly, a small group went to Croatoan Island in the fall or winter of 1587 to wait for John White to return,” commented Jamestown Rediscovery President and First Colony board member James Horn, ”while the remainder moved inland to the mouth of the Chowan River and Salmon Creek.”

The colonists told John White that it was their intention to relocate some 50 miles into the mainland after he sailed for England. The archaeological sites referenced here on Salmon Creek are approximately 50 nautical miles from Roanoke Island.

Interest in this area accelerated in 2012 when curators at London’s British Museum, at the request of First Colony Foundation, examined a 1585 watercolor map of Sir Walter Raleigh’s Virginia attributed to John White. Study of the map titled Virginea Pars revealed symbols of period fort designs under and atop a small piece of paper applied to the surface of the document. The small patch covers the area of northeast North Carolina (now Bertie County) where Site X, Site Y, and Mettaquem are located.

A 1608 map drawn for the Jamestown colony, now in Spanish archives, suggests that survivors of the Roanoke Colony were present in the area of Bertie County. However, Jamestown settlers were never able to make contact with any English in the Chowan River basin. The fate of these colonists is still unknown.

North Carolina historians Samuel A. Ashe and Dr. Thomas C. Parramore both advocated seeking evidence of the Lost Colony in the vicinity. James Horn reached a similar conclusion in his book A Kingdom Strange: The Brief and Tragic History of the Lost Colony of Roanoke.

First Colony Foundation intends to present more detailed informaion on its website www.firstcolonyfoundation.org. It is coordinating public information and education regarding Site X, Site Y, and Mettaquem with North Carolina Parks, Bertie County, and the Roanoke-Cashie River Center in Windsor.

Students at public schools in the Roanoke-Chowan area will spend the next nine weeks just as they have done since... read more