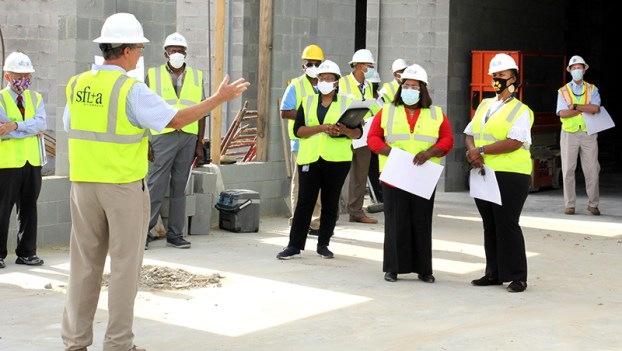 Tom Hughes (second from left) of the Raleigh-based architectural firm SFL+a points out a few features of the new Ahoskie Elementary School that is currently under construction. Hughes helped to lead a tour of the unfinished structure on Thursday afternoon. Staff Photo by Cal Bryant

AHOSKIE – Currently, it’s a drab gray structure positioned on a dusty, un-landscaped lot. But in less than one year, it will transform into an eye-pleasing facility and grounds whose sole purpose is to provide children with a productive educational environment while also serving as a home to community events.

Hertford County Public Schools (HCPS) hosted a tour here Thursday afternoon of the ongoing construction at the new Ahoskie Elementary School. With 55,000 square feet of educational space, plus an auditorium, the school comes with a $21 million price tag. Hertford County’s investment is $6 million as they received a $15 million grant from the state’s Needs-Based Public School Capital Fund.

“We’re certainly happy about what you see here today,” stated HCPS Superintendent Dr. William T. Wright Jr. as he welcomed a group of invited guests that included several of his staff, Hertford County Board of Education and Board of Commissioners members, the Hertford County Manager, Town of Ahoskie officials, and representatives of A.R. Chesson & Sons, the project’s general contractor.

“There’s been many, many, many years of conversation about building this school and it’s finally coming to fruition,” Dr. Wright continued. “The Hertford County Board of Education and I wanted to give you – the stakeholders in this project – an opportunity to see firsthand the progress we’ve made. We want you to see what’s going to be where inside this school.” 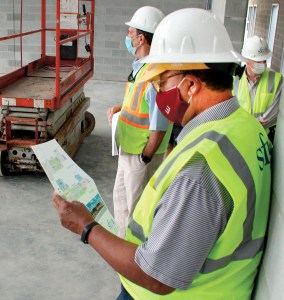 J. Wendell Hall, a member of the Hertford County Board of Education, looks at an architectural layout of the new elementary school while taking Thursday’s tour. Staff Photo by Cal Bryant

Wright along with Tom Hughes of SFL+a (a Raleigh-based firm who is serving as the architect for the project) led the tour group.

“We believe that with our design and the outstanding job of the contractor and sub-contractors, the new Ahoskie Elementary School will become the centerpiece of this community,” stated Hughes. “What you are seeing today is just the framework; there’s still a lot of work to be done. I encourage you to use your imagination of a finished project, a building being used by the students, teachers and staff.”

Prior to entering the building near its southwest corner, Hughes mentioned to the group that they were standing at a point where parents/guardians would drop off / pick-up students. There will be a protective canopy in that area. Those arriving by school bus are dropped off at the opposite end of the building, also with a protective canopy, where the cafeteria is located.

Upon entering the building where the administrative offices are located, the first thing you notice is the “sight vision” those school officials will have.

“Supervision and observation are the most important things when it comes to safety and security,” Hughes stressed to the tour group. “When I come to this main intersection, I can see the front door and I can see all the way down [the main hall]. For a principal, that’s absolutely critical for safe, daily operation. It’s safe and secure.”

From there, the group toured areas that will serve as the media center and the gymnasium/multipurpose room. Just beyond the gym (outside, but adjacent to the main building) is where the site preparation work is currently underway for a 350-seat auditorium, which was added to the overall project. The auditorium can also be used to host community events.

“There will be a secondary entrance to the building that will be utilized for the public to access the auditorium for those community events,” Hughes noted, adding that the school can be cordoned off during that time. “That way you can utilize the main parking lot at the front of the building instead of bringing traffic around to the back of the building.”

The tour group paused to gather inside one of the classrooms where Hughes pointed out a couple of key elements of the of the project’s architectural design.

“This will be an extremely energy efficient building,” he said. “The roof is heat reflective. The building is positioned on an east-west foundation, meaning the front and back of the building face the south and north respectively. As you can see, the windows on the north side are very tall while the ones on the south side are shorter. On the south side we get direct exposure from the sun. Windows on that side will have sunscreens. The tall windows on the north side help us hold daylight in the right way; it gives us more natural light and that, combined with effective LED lighting, creates an educational environment that’s more conducive to learning.”

The area of the building where the classrooms will be located is two stories (4th grade downstairs with the 5th graders on the second floor). The second floor is accessible by stairs and elevator.

Hughes also highlighted that the building will feature the latest technology, to include wireless systems. The classroom ceilings are also designed for better acoustics.

The cafeteria space can also be closed off to the rest of the building and used for smaller scale community events. The public entrance for those types of events is the same location to be used by students who arrive to school by bus.

Dr. Wright said the school is projected to open in August of next year.

“This new school has been a long time coming; a lot of work over a number of years has taken place among a lot of the faces here today to make this happen,” Dr. Wright remarked. “We’re getting a 21 million dollar school for six million dollars….we’re very excited about that. We look forward to August of next year when we invite all of you back for our ribbon-cutting ceremony and the formal opening of the new Ahoskie Elementary School.”

JACKSON – With plenty of praise for the idea, the Northampton County Board of Commissioners easily approved a proposal for... read more