Back to the Blue & White: Jackson returns to Chowan

Jackson played for Chowan from 2001-2005 while etching her name into the school’s record books as the program’s all-time leader in assists (447) and steals (264). Jackson ranks sixth in Chowan’s Division III history in points with 820 while helping the program to 66 wins, a USA South Regular Season title and a runner-up finish in the USA South Championship game. 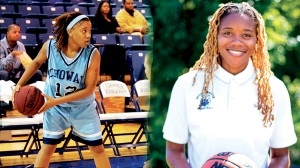 Kara Jackson is shown at left during her playing days at what was then Chowan College. Jackson (her current photo at right) is returning to the Murfreesboro campus where she has been hired as the assistant coach for the women’s basketball program. Contributed Photo

“It’s a blessing to be back at my alma mater,” stated Jackson. “I am excited about being able to add to the rich culture here at Chowan in my role as a coach now.”

Coach Jackson helped Bryant & Stratton College in their first six seasons of existence starting during the 2014-15 season. The Lady Bobcats would produce a 19-8 overall season and made an appearance in the NJCAA Region X Quarterfinals. That season, B&S ranked as high as seventh in the nation.

During the 2015-16 season, the Lady Bobcats finished 16-3 overall and ranked as high as ninth in the nation before their season was cut short in January. B&S would rank first in the NJCAA in steals per game (15.8).

Jackson mentored Kiana Crevison-Artis to a NJCAA Region X All-Region and All-Academic selection during the 2016-17 season. The Lady Bobcats finished with a 20-10 overall record, falling in the Region X Quarterfinals.

During the 2017-18 season, Bryant & Stratton would produce a 19-12 overall record with their third appearance in the NJCAA Region X Quarterfinals.

The Lady Bobcats had their most success during the 2018-19 season going 25-6 overall and 17-3 in league play and grabbing the #1 seed in the Region X Conference Tournament. B&S would be named Region X Runner-Up after falling in the championship game. Jackson helped guide Tyriyanna Owens and Tiara Williams to NJCAA All-Region selections.

In her time with the Lady Bobcats, Jackson helped more than 10 players progress to Division I/II levels after their time at Bryant & Stratton.

During her playing career with the then Chowan Braves, Jackson provided a spark at both ends of the floor as the program’s all-time leader in assists and steals. The guard also ranks third in career 3-point field goals made (96) and sixth in field goals made (289).

The Norfolk, VA native graduated from Chowan in 2006 with a bachelor’s degree in Physical Education. Jackson received an associate’s degree in Business from Bryant & Stratton in 2020.

It’s no secret that 2020 has probably been the most unordinary year anyone has had in a long time. It’s... read more