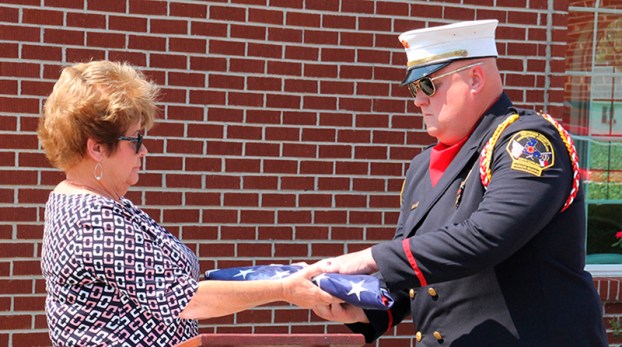 AHOSKIE – Despite the passage of 20 years, the horrific images of the Sept. 11, 2001 attacks by foreign adversaries on United States soil remain forever etched in the minds of millions of Americans.

Those memories were relived near here this past Sunday (Sept. 12), but this time around the American flag and way of life was not under attack.

Woodmen Life Chapter 328 conducted a “Honor and Remembrance” ceremony at Hickory Chapel Free Will Baptist Church where a new flag and flagpole were dedicated in honor of those that perished 20 years ago as well as the heroes of that era and those who still protect citizens today. 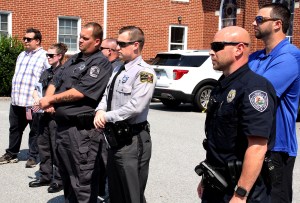 Local first responders were recognized for their daily tasks of protecting the citizens of Hertford County. Staff Photo by Cal Bryant

Eleanor Hollowell, representing Woodman Life Chapter 328, said her organization has been committed since 2002 to honor the victims and heroes of the Sept. 11, 2001 terror attacks on our nation.

“We not only honor those heroes and those victims, but also the men and women of our Armed Forces serving in combat,” Hollowell said. “In addition, this ceremony to dedicate this flag and flagpole also serves as a way to pay tribute to the men and women in this community who risk their lives daily to keep us safe…our police officers, firefighters, EMTs, and other first responders. They all deserve our thanks and admiration, and we can think of no more special way to honor these brave men and women than by the sight of the American flag flying proudly.”

Hollowell stressed that patriotism is at the core of Woodmen Life. Since 1947, Woodmen Chapters across the nation have presented more than 3 million American flags to community-based organizations. Additionally, Woodmen Life has presented History Awards to nearly 285,000 students enrolled in elementary, junior, and senior high schools.

“In 2001 we experienced horrors that we never thought could occur in this land of freedom and opportunity,” Hollowell stressed. “Thousands of our citizens and those of other countries lost their lives in the terrorist attacks in New York, Washington, DC, and Pennsylvania. Hundreds of heroes materialized during and after those attacks, and it is to them, and to those fighting to strengthen our freedom, that we dedicate this ceremony.

“On this anniversary of the attacks, we each remember where we were and what we were doing on the morning of Sept. 11, 2001,” Hollowell continued. “The events of that day changed our lives forever, making us realize that freedom is a very precious thing and not to be taken lightly.”

Danny Casper and Clay Barmer represented the Hertford County Firefighters Association at Sunday’s ceremony. Casper accepted the American flag from Hollowell and then was joined by Barmer to raise it to half-staff on the new flagpole located near the front corner of the church’s Fellowship Hall. 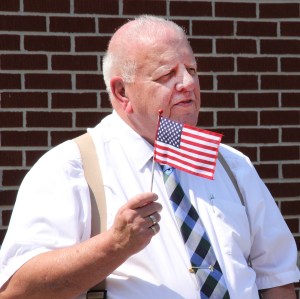 Rev. Jim Skipper, pastor of Hickory Chapel Free Will Baptist Church, shares a story on his love of the American flag. Staff Photo by Cal Bryant

“It’s hard to believe that it’s been 20 years; all of us have a story to share about that day….where we were at, how we felt when we heard the news of the terror attacks on our country,” said Casper, who serves as Co-Commander of the Firefighters Association Honor Guard.

He shared that eight paramedics, 71 police officers, and 343 members of the Fire Department of New York City were among the 2,977 individuals that died as a direct result of the terrorist attacks on Sept. 11, 2001.

But the pain of that day goes even deeper.

“There have been some long-term effects since that day,” Casper said. “Over 84,000 people are having some type of treatment today due to ailments such as asthma, PTSD, and other health and mental issues. There’s been almost 15,000 people that have died due to cancer-related issues from that day. And there are around 5,000 Armed Services men and women from our country who have died fighting terrorism since 9-11.”

A moment of silence was observed followed by the playing of “Taps” by Rachel Hoggard.

Rev. Jim Skipper, pastor of Hickory Chapel Free Will Baptist Church, opened the ceremony by sharing a story of his time spent in the military and the pride that swelled within his heart everytime he laid eyes on our nation’s flag.

“When I was stationed in Germany, when I was on base and passed by our flag, it was a lot more than just a flag representing a country,” Skipper recalled. “When I looked at the flag back then I saw home. I saw North Carolina…Mt. Olive, North Carolina. I saw my parents; I saw my sister; I saw all of my childhood friends and schoolmates. You don’t know how much seeing this flag means when you’re in a foreign country where you don’t speak their language and they don’t fly your flag [outside the military base]. This flag means a great deal.”

In his opening prayer, Rev. Skipper said he “pitied those who do not love America because they don’t know what they’re missing.”

“God, you have blessed this country mightily,” he continued. “We were founded on Judeo-Christian principles and have been one of the most prosperous nations in the world, all due to our belief and our faith in our Lord, Jesus Christ.”