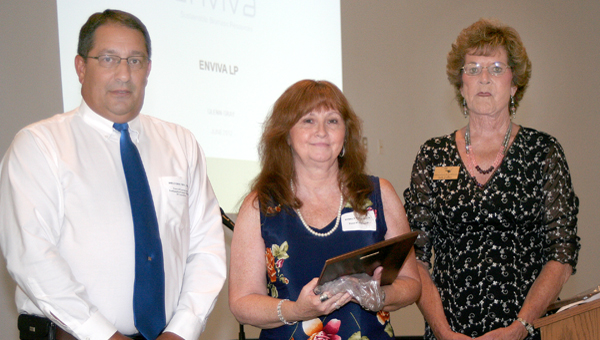 Rebecca Warwick (center) accepts a plaque on behalf of Seaboard for Town of the Year from Northampton County Chamber of Commerce officials Brian Bolton (left) and Judy Collier (right) during the organization’s annual meeting held on Thursday in Jackson. Staff Photo by Amanda VanDerBroek

JACKSON – Woody biomass is the way of the future for Enviva and Northampton County.

Enviva’s Glenn Gray, with project development, was the featured speaker and gave those attending insight and an update on the company’s planned Northampton County wood pellet manufacturing facility, a $60 million investment.

According to Gray, the Northampton pellet manufacturing plant will be constructed at the Northampton County Commerce Park in Garysburg and provide 72 permanent jobs. Enviva’s Ahoskie plant recently came up to full capacity and there are plans underway to place a facility in Southampton County, Va.

“We are thrilled to death to be in Northampton County,” he said. “It’s a real pleasure for us. We don’t take lightly where we select our sites and where we build our facilities.”

Enviva, established in 2004, produces wood pellets and wood chips to be utilized as an alternative to fossil-fuels. The market for this type of biomass has exploded, particularly in Europe among utility companies to reduce their greenhouse gas emissions.

“We believe the future is renewable, sustainable biomass fuels,” he said. “Our mission is to become the preferred partner and supplier of sustainably-sourced wood pellets and other processed biomass to serve power generation and industrial customers seeking to decrease their dependence on fossil fuels and reduce their carbon footprint.”

Gray noted 2011 was a “breakout year” for Enviva with the company acquiring its own Chesapeake Port terminal for exporting the company’s products. Last March, Enviva began shipping materials out of their Mississippi facilities to their first European customer.

“In October we reached a supplier agreement with Dominion Power to start supplying them with biomass fuels,” he said. “They are converting three of their coal fire power generated facilities to biomass.”

He said the reason behind all of Enviva’s development is growth in the biomass market.

According to Gray, consumption of biomass fuel in Europe has increased more than 300 percent in the last five years and projections for the next 10 years is that growth will increase another 100 percent.

“That’s why we’re doing what we’re doing,” he said. “The growth is just phenomenal. It’s all in Europe right now, but it’s moving to Asia.”

Gray said with the completion of the Northampton and Southampton facilities the three area plants will have an annual capacity of 1,776,000 tons altogether. He noted that 1,776,000 tons is already sold out.

“Our business plan is that we don’t build a plant to capacity until that plant is sold out,” he said.

Gray said Northampton, when it starts up, is sold out for the next 10 years as is the case with Southampton.

He said the focus on the southeast and especially in the region is due to the abundant supply of forest resources in the “wood basket,” which is accentuated when the International Paper Mill shut down.

“You had the infrastructure, you had the resources that we’re being utilized,” he said.

Gray said the Northampton manufacturing plant is expected to be completed in the first quarter of 2013 and Enviva officials have already begun the hiring process. The 500,000 ton capacity facility will consume one million tons of green wood a year which equates to 160 truck loads a day (Monday-Friday) of wood.

Gray said the Ahoskie plant is currently the flagship of Enviva’s facilities and it’s the largest facility.

“But sometime during the first quarter of next year that flag will get transplanted in Northampton,” he said. “Northampton will be the largest facility that we have.”

Gray said the Southampton facility (expected to come on line by the second quarter of 2013) will be a duplicate of the Northampton plant.

In other chamber business, Wendell Edwards, Sidney Joyner and Denise Fleetwood were voted on to the Chamber’s Board of Directors. Chris Vincent was selected as First Vice President, Edwards as Second Vice President, Betty Lou Barnes as Secretary and Jim Gossip as Treasurer.

Futrell Pharmacy was named Business of the Year, Seaboard was chosen as the Town of the Year and Cindy Watson, who is rotating off the Chamber’s Board of Directors, was recognized for her work.

Entertainment was provided by Captured Hearts.