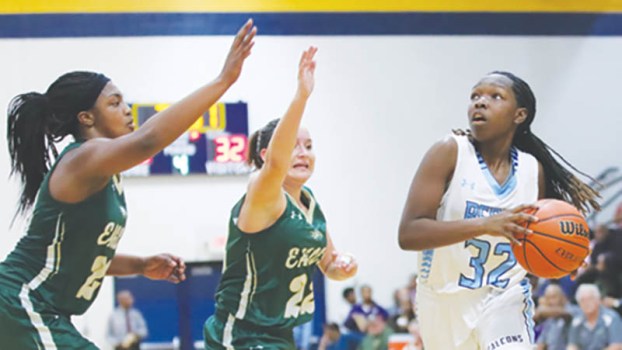 AHOSKIE – Once won’t be enough.

In the first of what will be at least three meetings this season, Bertie High girl’s basketball team triumphed 54-37 over fellow Northeastern Coastal Conference member Northeastern High in a non-conference tilt.  The two combatants met in the semi-final of the Roanoke-Chowan News-Herald Holiday Classic Tuesday here at Hertford County High School.

The win sends the Lady Falcons on to the girl’s championship game tonight (Thurs.) against Plymouth.  Bertie will be seeking its 16th title in the last 18 years.

Akyia King led the Lady Falcon attack with 22 points followed closely by Autum Morings with 20.  Breanna Proctor of Northeastern led all scorers with 25.

“It was physical, that’s for sure,” said Bertie coach Kelvin Hayes. “We managed to get them in foul trouble and keep #20 (Proctor) off the scoreboard in the second quarter; then we picked things up in the second half.

Corleis Riddick’s three-point basket in the opening minute gave Northeastern its only lead of the contest, 4-2, before Bertie went to work.  Jomiya Early’s three-pointer put Bertie in front for good, and then King scored seven in a row before an Eagles basket made it 12-6.  Bertie constantly drove the lane, where they matched up better against Northeastern and the mis-match led to some early Eagles fouls.  Bertie made five-of-eight and held a 19-8 advantage after the first quarter.

The Falcons brought the pressure defense in the second quarter and Northeastern had trouble handling it.  The Bertie transition game then went full-bore with easy fast-break lay-ups scored off turnovers.  After one steal and lay-up by Morings, Bertie had carved out a 15-point lead, 27-12.  The Falcons finished the frame making five-of-ten foul shots and carried a 32-16 lead into the locker-room at halftime, having doubled-up their opponent.

Morings scored Bertie’s first five points of the second half for a 37-20 lead after Proctor found here rhythm once again and scored four for the Eagles.  Still, the Falcon defense was stifling while their offense attacked the rim at the other end. Bertie upped their lead to 20 points before Alexis Harris drained a late lay-up to make it 43-25 after three quarters.

Hayes cleared his bench for the final frame and the reserves added to the offensive output with a steal and lay-up for a 21-point lead – the largest of the contest.  Northeastern shaved four points off that total for a 17-point Falcon win – their 10th of the season against no defeats – and has Bertie once more championship-bound.

“We finally relaxed there in the third quarter,” said Northeastern coach Pat Thornton, “but it was a little too late.  We have to get Bree some help on offense.”

Northeastern (2-4) played Hertford County Wednesday night in the consolation game, but it was not completed by press time.

AHOSKIE – It was good strategy, for a while. A deliberate half-court offense with a modified zone defense kept Northeastern... read more