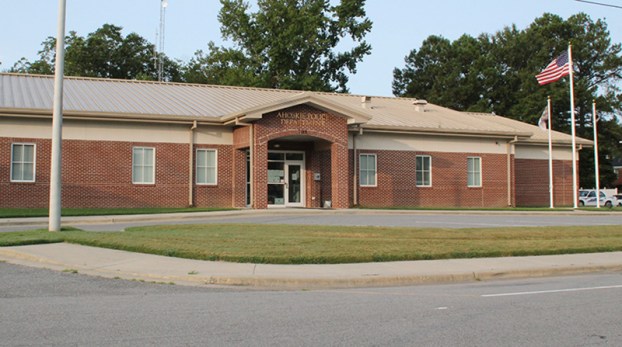 A unanimous vote by the Ahoskie Town Council on Monday will lead to higher salaries within the Ahoskie Police Department in an effort to fill four vacant positions. Staff Photo by Cal Bryant

Town Manager Kerry McDuffie said three ideas up for discussion were increasing the part-time salaries of police officers from $15 to $19.11 per hour, implementing a 2.3 percent cost of living adjustment for all town employees, and looking at a $2,500 signing bonus for newly hired police officers.

“With four openings [within the police department] that’s a definite concern that we need to address,” McDuffie said at the outset of Monday’s meeting. “With the length of time it takes from when you identify a candidate to hire to the point where you can put them on the street, you’re looking at a minimum of three months and can be as much as 10 months. That all depends on their previous training and whether or not they need to complete BLET (Basic Law Enforcement Training). We need to take this seriously and move forward in addressing this.”

McDuffie said the cost of living raise was part of the town’s FY 2020-21 budget, but was not immediately implemented on July 1.

“We wanted to see what was going to happen with the sales tax revenue we receive and commercial water sales,” he noted. “We needed to see those numbers.”

McDuffie said the sales tax numbers are higher than anticipated despite the ongoing COVID-19 pandemic.

“This morning (Monday), we got our numbers for the month of July; they came in at $131,295. That is the highest amount of sales tax in a single month we have received over the past three years.”

“We feel comfortable with the sales tax numbers we are receiving and our commercial water sales, which took a dip over the spring months, are now back up,” he stressed. “With that I am recommending we implement the 2.3 percent cost of living raise for all of our employees, which will help with the police department.”

As for the signing bonus for new police officers, McDuffie said several different dollar amounts were discussed, but he settled on the $2,500 figure.

“That’s a significant amount,” he remarked, adding that the base salary for a new officer, with BLET certification, is $40,700. “We can give [Police] Chief [Troy] Fitzhugh the authority to offer that bonus between now and Feb. 28, 2021. By then we can see where we’re at [financially] and make a decision at that time if we want to extend that bonus and make it more or make it less, depending on if we still need to hire more officers.”

The third suggestion to help fill the void of police officers is to increase the per-hour pay rate of part-time law enforcement personnel. McDuffie said Ahoskie currently pays $15 per hour, which he noted was the same for the Bertie Sheriff’s Office, Roanoke Rapids Police, and Windsor Police. He added that other local departments paid their part-time officers at a higher per hour rate: Aulander Police ($16.75), Gates County Sheriff ($16.87), Woodland Police ($17.25), Murfreesboro Police ($18), Northampton Sheriff (up to $18), and Vidant Company Police ($24 to $27.50).

“We’re on the low end of that rate; we should be near the top of that range due to the amount of police activity we have,” McDuffie observed.

He added that any future cost of living raises for town employees will cause the part-time pay rate for police officers to increase.

“We’re hopeful that these three recommendations will allow us to get our police department back up to full staff,” McDuffie stated.

Mayor Weyling White asked McDuffie would a budget amendment become necessary to cover the funds needed for the signing bonuses.

“No, because since July 1 we have over $60,000 available [in the police department budget] that is unspent due to not being at full force,” McDuffie answered.

Freeman motioned for approval of all three measures. Councilman Roy Sharpe offered a second and the motion was approved without objection.

It was later noted by McDuffie that with the approved pay raise, the starting salary for a BLET certified police officer is now $41,700 annually.

“For those who are not certified, we’ll start them out at $35,000 per year and pay for their BLET,” he told the News-Herald on Tuesday morning. “Then, after they get certified, they will be bumped up to the $41,700 salary.’

In a different matter at Monday’s meeting, the Council approved a recommendation from McDuffie to purchase a new backhoe at a cost of $96,258. McDuffie said the current backhoe is old and in need of nearly $20,000 in repairs. He added that the replacement cost was part of the FY 2020-21 budget, but was not immediately purchased as the town waited to see if there would be any significant financial impacts due to COVID-19.

Additionally, Mayor White informed the Council that he has scheduled a roundtable discussion at 1 p.m. on Wednesday (Sept. 16) to address the growing number of COVID-19 cases locally.

“We’re seeing a big surge in cases; there were 75 active cases last Friday, and that number is up to 83 today (Monday),” White stressed. “This is alarming news. We need to do all we can do to keep our citizens safe.”

WINDSOR – Six employees of Bertie County Public Schools have tested positive for COVID-19 and are currently in quarantine. All... read more