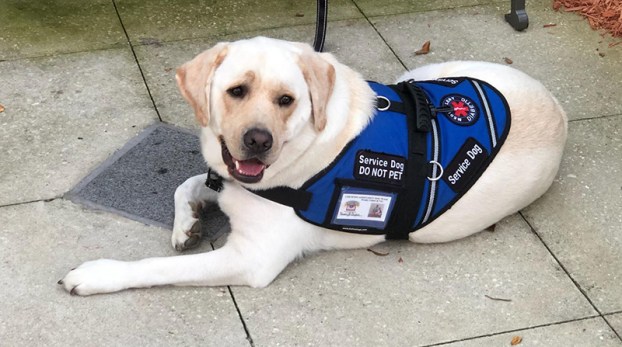 Fitz, a yellow Labrador Retriever trained by an organization in Kansas, is now the companion of a former Gates County Public Schools teacher and helps control her blood sugar levels. Contributed Photo

Wendy Casper would be the first to admit she had a fear of dogs since childhood, but now she has a friendly furry companion who accompanies her everywhere she goes.

Fitz, a yellow lab, is Casper’s diabetic alert dog, providing her with a life-saving service and also some peace of mind while dealing with her condition.

“It’s been the best thing I’ve ever done,” Casper said. “It’s made a huge difference in my life, that’s for sure.” 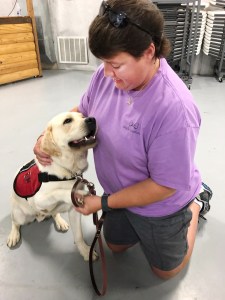 Wendy Casper and Fritz have been together since August of 2018. Contributed Photo

Casper was diagnosed with Type 1 diabetes at the age of five, and she’s spent the past four decades of her life being insulin dependent in order to manage the disease. Though she’s a native of and lives in Chowan County, Casper previously worked in the Gates County School system for years until she had to quit to maintain more focus on managing her diabetes.

A few years ago, Casper started looking into getting a diabetic alert dog, which is a kind of service animal trained to detect changes in blood sugar before they get to dangerous levels.

“They work by smell,” she explained. “If my blood sugar is going high, I put off a fruity smell, and if it’s going low, it’s a metallic smell.”

After so many years of living with diabetes, Casper said she often loses the sensation of when her blood sugar levels fluctuate too high or too low. Her service dog can’t tell her what’s specifically wrong with her levels, but he can alert her to check them and take appropriate action, especially if those levels are changing rapidly.

“If my blood sugar gets off, he doesn’t make a scene,” she said of his calm working demeanor.

Fitz has a number of different ways to alert Casper that something’s wrong. Most often he will paw at her or stare until he gets her attention. If she’s in a restaurant or driving a car, he’ll simply sit up. He keeps alerting until she does something to treat her condition, whether that’s eating something or taking medicine.

“If he doesn’t get me to do something, he will go find someone else to tell,” she added, recalling times Fitz has gone to her parents or her husband if necessary.

While her blood sugar range usually ran between 70 and 200 before she got Fitz, now he alerts her if it gets below 90 and above 140.

“That’s a really good range for a diabetic,” she noted.

Despite her fear of dogs, Casper said she began researching the possibility of a diabetic alert dog a few years ago. She knew it would be a benefit to help manage the potentially life-threatening disease.

The cost for getting a service dog was expensive, but she was eventually directed to an organization in Kansas called CARES Inc. (Canine Assistance Rehabilitation Education and Services). They keep their costs lower by collaborating with local prisons on a program where inmates do the obedience training with the dogs.

In August 2018, Casper got the call to come to Kansas to receive her service dog. She and her husband traveled there for a weeklong class where she would meet Fitz for the first time.

“I was nervous because I knew I’d be in a classroom with a number of dogs. But I was okay with it because I had time to process it. I knew it’s what I wanted to do,” she recalled.

She said meeting her new companion was “love at first sight.”

“I went right down on my knees where I was sitting, and he came right on up to me, laid his head on my chest and put his paw in my hand. It was a bond right then,” Casper said. “I had no fear because I knew that dog was there to help me.”

And he has definitely helped Casper many times. She recalled several times when he performed his job perfectly, alerting her before her blood sugar levels got unmanageable. There is such a strong bond between them, there have been a few times when Fitz has known something was wrong even if they were separated, such as if he was in the house and Casper was out in the yard.

Service animals are allowed to go anywhere people can go, so the two travel together all the time. Casper said she often shares information about service animals with others so they understand how he works.

“A lot of folks don’t realize what the reasoning is behind not petting a service dog,” she said. “Fitz works with his nose, so if someone else is rubbing him, he’s got their scent. That could distract him from letting me know something is wrong with me.”

Casper admitted she’s grateful to have a way to better control her diabetes, and she definitely recommends getting a diabetic alert dog to anyone who also has a difficult time controlling their blood sugar. It’s not always easy to take care of an animal, she said, but the benefits are worth it.

It’s definitely made an impact on Casper’s life.

“He is my best friend,” she said. “The Good Lord made him for me, and I just couldn’t imagine life without him. I say he’s my ‘perfect fit Fitz’.”

On the heels of at least eight inches of rain this week, local rivers and streams flooded their banks while... read more