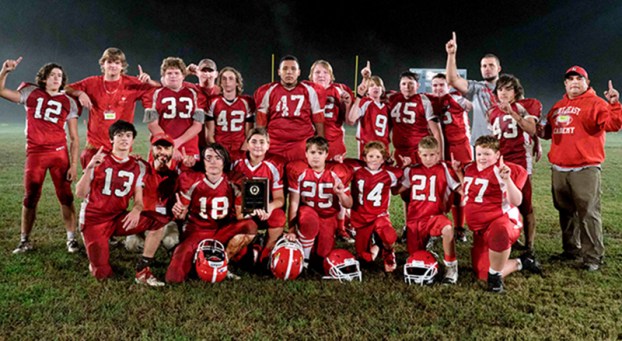 Dalton Vann scored the game-winning touchdown with just over three and one-half minutes remaining here Friday night and then joined forces as part of a stout defense to preserve a hard-fought 14-12 victory by Northeast Academy over Wayne Christian School in the championship game of the Colonial Carolina Conference’s post-season tournament.

The win came on a foggy night on a field still showing the effects of 8 inches of rain 36 hours earlier. And it came after an extremely slow start by the unbeaten Eagles who ran only one play for minus four yards, and a lost fumble, in the first quarter.

“We worked way too hard to let ourselves dwell on mistakes,” said Northeast head coach Stevie Flythe, finally cracking a smile after the tough battle on a muddy field. “I kept being positive with them and they didn’t give up, either on me or on themselves. That’s the sign of a championship caliber team and I’m proud of the work they put in to hold this trophy.”

The sluggish start carried over to the second quarter where the Eagles also failed to reach the endzone. That marked the first time the team had posted goose eggs on the scoreboard in the first half of any of their previous games.

Their lone offensive surge of the opening two periods came in the final minute of the second quarter, just after Wayne Christian had scored to claim a 6-0 lead thanks to an 18-yard touchdown run by Caleb Bass.

Vann – who led the team in rushing with 93 yards on eight attempts – turned in back-to-back runs covering 12 and 13 yards respectively followed by his 9-yard pass to Nathan Trevino. That allowed Northeast to cross midfield for the first time, but the drive blew up in the wake of a pair of 15-yard penalties against the Eagles – one for intentional grounding and the other for unsportsmanlike conduct.

“Our first two games were blowouts, so having these last two games played really close helped us prepare for this game,” Flythe noted. “We knew it was going to be a battle against an outstanding and well-coached Wayne Christian team.”

Whatever Flythe said at halftime proved effective as the Eagles looked more like a team with five straight wins under their belts coming into the title game.

That was evident on the kick-off to open the second half. Jayden Watts gathered in that kick at his own 27 yardline and set sail down the home sideline. He suffered a severe cramp and stumbled out-of-bounds at the Wayne Christian 22 yardline. His effort, however, wasn’t in vain as Trevino took the first-down hand-off from that point, rushed through a hole on the left side, and cruised untouched 22 yards to paydirt. Dawson Vann ran in the two-point conversion, staking Northeast to their first lead of the night at 8-6 only 45 seconds into the third quarter.

In championship-worthy fashion, Wayne Christian responded with a seven-play drive covering 54 yards. Even a 4th-and-14 play couldn’t stop the visitors as Bass took a toss sweep around the right side 45 yards to the endzone. Bass would finish his night’s work as the game’s leading rusher with 123 yards on 22 carries.

On the all-important conversion, the Northeast defense stood tall and prevented that two points…a play that would later prove as the difference in the game’s final outcome.

Not to be outdone, Northeast answered with a nice drive of their own, highlighted by Dalton Vann’s 29-yard scramble down the right sideline. That put the Eagles inside the Wayne Christian 20 yardline, but Northeast lost a fumble two plays later that ended the scoring threat.

“We still didn’t get down on ourselves after that fumble,” Flythe stressed. “We knew turnovers would be a factor tonight, especially in these conditions, but we were able to keep our heads in the game and it paid off later.”

Thankfully, the Northeast defense bailed the team out of trouble as key tackles by Trevino and Marshall Medford resulted in combined losses of four and two yards, forcing Wayne Christian to punt from their own 22 yardline with less than six minutes remaining in the game.

“Believe it or not, but this is Marshall’s first-ever year playing football; he stepped right in and has progressively gotten better with each game,” Flythe said of his 7th grader who plays defensive end.

A 15-yard face mask flag on Wayne Christian during the Northeast punt return gave the Eagles the ball at the visitors 48 yardline. Four plays later, Dalton Vann took off on a mud-splashed, 27-yard jaunt down the left sideline….knocked out of bounds at the two yardline. He finished what he started on the game’s next snap, barreling into the endzone with the game-winning touchdown with 3:37 remaining.

It was that type of hard-nosed running that helped the home-standing Eagles, especially in the second half. For the game, Northeast pounded out 162 yards on the muddy field. In addition to Dalton Vann’s efforts, the Northeast ground game was aided by Dawson Vann and Trevino with 36 and 33 yards respectively, each toting the pigskin six times.

Wayne Christian’s final possession was stonewalled by key defensive plays from Dawson Vann, Trevino, and Dalton Vann, who combined for 19 tackles during the game. The visitors lost possession on downs at their own 31 yardline with 56 seconds left and Northeast ran out the game clock from that point.

Flythe, who previously coached the school’s varsity team, said it was special to have the opportunity to coach again.

“It started just as a temporary thing [return to coaching], but I couldn’t let this group of boys go,” he said. “This is a special bunch. They deserve this [championship] and winning it on this field is a memory that will last a lifetime. This was a mission accomplished.”

There are perks when it comes to being old. Sure, the senior citizen discounts on food, travel, lodging and other... read more