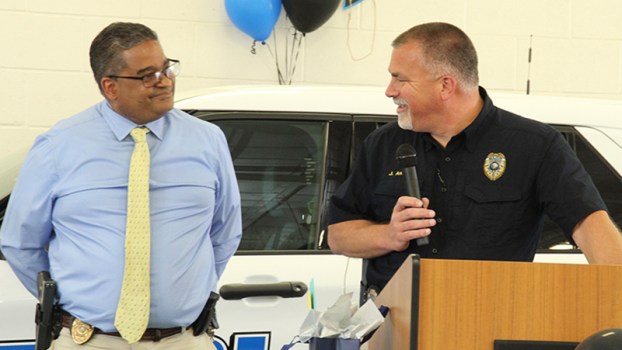 Hail to the Chief!

AHOSKIE – Troy Fitzhugh always knew this day would come. What he failed to realize is just how fast it got here.

Fitzhugh retired on Friday as the Chief of the Ahoskie Police Department, a position he has held for the past 17 years. All totaled, he spent 30 years in law enforcement in Hertford County; 29 of those were with the Ahoskie Police.

“Looking back, I have no regrets,” said Fitzhugh during an interview one day prior to his retirement. “Sure, we still have some unsolved murder cases, but this department will not rest until those suspects are arrested, prosecuted, and sentenced for their crimes.” 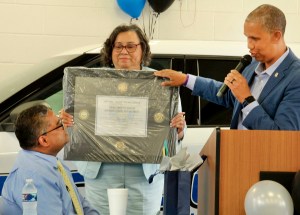 The Long Island, New York native moved to Ahoskie in 1989 and obtained a degree in Criminal Justice. He worked for a short time as a correctional officer in Virginia before being hired by the now late Hertford County Sheriff Winfred Hardy to work at the jail in Winton. That led to a job as a sheriff’s deputy before he took a position as a patrol officer in Ahoskie in 1992.

“[Now retired Ahoskie Police Chief] Steve Hoggard got me started here, he made me the police officer I am today and made sure I had all the training and certification I needed to gain promotions,” Fitzhugh recalled. “I used Chief Hoggard’s same blueprint when I became the Chief in 2004. What worked for me as a rookie cop worked well for those officers that worked for me while I was in charge. All that training is worth the time and the effort to make yourself a better police officer and supervisor.”

As a rookie, Fitzhugh said he was blessed to learn from other APD officers as well.

“Curtis Freeman was my training officer back then; he taught me a lot,” he stressed. “And my first partner was Ed Webb, who went on to become the Sheriff over in Gates County. The Ahoskie Police Department has seen many of its former officers go on to bigger and better things….to become Sheriffs in other counties and police chiefs in other towns.”

Along the way, Fitzhugh earned his Intermediate and Advanced law enforcement certificates from the North Carolina Criminal Justice Education and Training Standards Commission. The latter, he noted, also included management classes that he would eventually use to earn the Chief’s chair at the APD.

Prior to that, Fitzhugh rose through the ranks at the department; Patrol Sergeant in 1998 and Detective Sergeant four years later.

“I continued to seek out training classes even after becoming Chief,” Fitzhugh said. “Those classes help with decision making, management, grant writing, and community policing. I also met with other police chiefs and county sheriffs. Their advice helped me along the way.”

He said the key to being an effective police officer is to gain and build the trust of your citizens.

“The most important thing is to always treat people the same way,” Fitzhugh noted. “Being in a small town, your residents will learn who you are and will respect what you do if you treat everyone the same.” 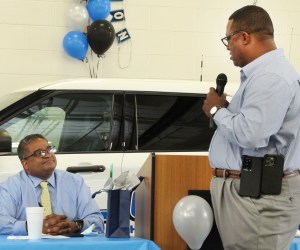 In today’s society where there are cries for defunding the police, Fitzhugh said if that becomes reality it present problems down the road.

“Without law enforcement, who do you turn to to enforce the laws we have,” Fitzhugh remarked. “Sure, there are documented cases of police officers stepping across the line, but don’t judge the entirety on the actions of a few. The great majority of law enforcement officers do things the right way.

“Every department is not the same, you deal with the ones causing issues,” he added. “If it’s a [police] policy issue that’s problematic, then those policies need our immediate attention to make them better. I know that people will get upset and may tussle with us when we make an arrest, that’s just human nature, but when we say that a person was arrested without incident, it’s a great day.”

Fitzhugh feels that he’s handing his keys over to his successor – current APD Major Jimmy Asbell – with the “cupboard nearly full.”

“We still have a few openings to fill, but the officers now on staff are all highly trained. I’m leaving the Major with a department he can build upon,” Fitzhugh stated.

As for his retirement plans, Fitzhugh said he would spend his first 30 days doing as little as possible.

“No more early mornings for me,” he laughed. “I may look into something else after that, but I’ll still be the same man whether I’m wearing a badge or not.”

Fitzhugh and his wife of 31 years, Angela, are the parents of three adult sons and the grandparents of six.

The Town of Ahoskie treated Chief Fitzhugh to a retirement luncheon on Friday at the Ahoskie Fire Department. There he was presented with numerous gifts and well-wishes from his family, friends, and his law enforcement colleagues.

MURFREESBORO – After a near 20-year absence, a Burke will once again stand inside the coaching box here at the... read more