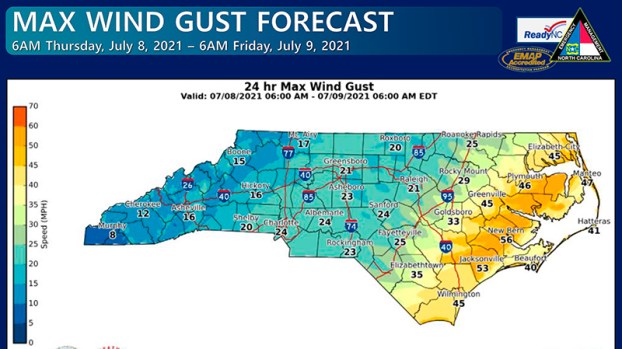 Maximum wind gusts at 39 mph or greater has led to a Tropical Storm Warning today (Thursday) for most all of the Coastal Plain region. Map courtesy of the National Weather Service

Conditions will continue to deteriorate through the morning as Tropical Storm Elsa moves northeastward through our state. 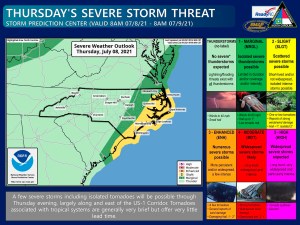 Most all of the Coastal Plains region – to include Hertford, Bertie, and Gates counties – is under a Tropical Storm Warning. That means tropical storm force wind gusts are expected to develop along/near coastal portions of northeast North Carolina later this afternoon and into the evening hours. Tropical storm force winds are at least 39 mph.

The heaviest rains are forecast for Central North Carolina, but overall 1-3” with localized totals of 5” are possible statewide through Thursday evening.

A Flash Flood Watch is in effect for much of the Piedmont and Coastal Plain.

The strongest wind gusts, reaching or exceeding tropical storm force, are expected in eastern NC where a Tropical Storm Warning remains in effect. Isolated power outages as a result of downed trees will remain possible with heavy rain and gusty winds.

Wind gusts 30-55 mph are possible for Eastern NC, with the strongest gusts along the Coast. 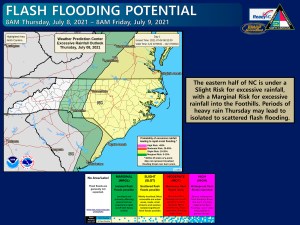 Wind gusts 25-35 mph are possible for Central NC, with the strongest gusts expected east of the US-1 corridor.

Wind gusts up to 25 mph are possible for western NC, with the strongest gusts expected in the Foothills.

Areas along the Coast are under a Slight Risk (level 2 of 5) for severe weather, with a Marginal Risk (level 1 of 5) in place for the Coastal Plain.

The greatest potential for severe weather today (Thursday), including tornadoes, will be along and east of the I-95 corridor.

A Tornado Watch is in effect for southeastern NC through 9AM today. The watch may be expanded or extended as Elsa moves through the region.

Tornado Warnings have already been issued this morning within the southeastern portion of the state. Maintain several ways to receive weather alerts in case a Tornado Warning is issued for your area.

Significant storm surge is not expected but minor water level rise (up to 2 ft above ground level) is possible along the coast, especially north of Cape Hatteras. An elevated rip current risk will remain along NC beaches through this week.

Conditions will begin to improve Thursday afternoon from south to north as TS Elsa begins to move out of the region.

Overnight, the track of Tropical Storm Elsa shifted westward slightly which resulted in a westward expansion of the rain, wind,... read more